Gamescom, the world´s largest fair for interactive entertainment and video gaming closed its doors on Sunday, August 17, 2014 in Cologne after hosting approximately 335,000 visitors from 88 countries and 700 exhibitors from 47 countries. With over 30,000 trade visitors, the fair reached an all-time high in attracting gaming studios, publishers and other industry players that exceeded even the record numbers of the previous year. Private visitors had a hard time getting in since tickets were sold out two weeks in advance.

Among the hottest topics were virtual reality and Sony´s Morpheus project that offers total immersion into games by means of a headset similar to the Occulus Rift (http://www.oculusvr.com) but designed specifically for gaming. While it is still nothing but a project and no decision has yet been reached, if and when a consumer product featuring this technology is introduced, first impressions look very promising (see http://www.techradar.com/reviews/gaming/project-morpheus-1235379/review#null).

The most prominent winner of the Gamescom awards this year was Evolve (Take-Two Interactive GmbH/2K) that took the prize in no less than five categories ("Best Console Game Microsoft Xbox", "Best PC Game", "Best Action Game" and "Best Online Multiplayer Game").  The "Gamescom most wanted consumer award" went to Nintendo for “Super Smash Bros.” (for a complete list of all Gamescom awardees 2014 see
http://www.gamescom.de/de/gamescom/presse/presseinformationen/gc_pressinformationen.php?aktion=pfach&p1id=kmpresse_gamescom_d&format=html&base=&tp=k3context&search=&pmid=kmeigen.kmpresse_1408123788&start=0&anzahl=10&channel=kmeigen&language=d&archiv=)

Gamescom´s ongoing success story reflects the general trend in the European and German gaming market that continues to rise despite a highly competitive environment. According to the numbers just published by the trade association BIU (http://www.biu-online.de), German players alone spent close to 800 million euros on PC-, console and handheld/mobile video games in the first half of 2014 which equals a 6% step-up from the previous year.  As expected, the percentage of games that are downloaded rather than sold in jewel cases online or in brick and mortar stores has risen from 1/8 in 2013 to one quarter in the first half of 2014. It is therefore a logical consequence that more consumers are playing online.

The assumption that the next gen consoles published last year will be the last of their kind may be premature though as Sony´s Playstation 4 and Microsoft´s X-Box one triggered 23% more sales than their predecessors PS 3 and X-Box 360 in the first 7 months following their introduction. In-game purchases experienced the biggest jump with a 256 % rise including browser based and app-based games: 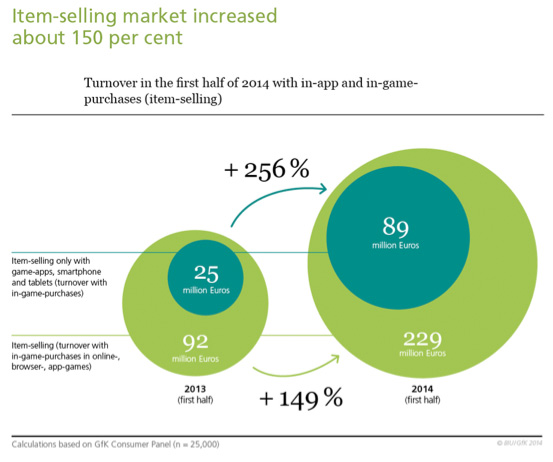 If you thought that video gaming is for kids, think again: Indeed, 39% of all players are 40 years or older and have the money needed for buying new games and making in-game purchases: 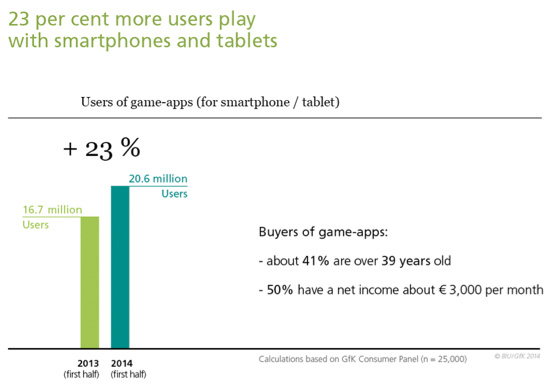 Summing up, the market for video games continues to grow with sophisticated console games still remaining the industry´s top seller but casual and online gaming increasing its market share. Contrary to common beliefs, video games are no longer predominantly consumed by minors but more and more enjoyed by adults. As kids and grownups are looking for new gaming experiences that take full advantage of the next gen consoles and powerful personal computers, virtual reality might just be the ticket to a thrill ride for consumers and the secret ingredient for publishers that will enable them to create truly immersive games that may make all non-VR games we´ve seen so far look like child´s play. Whatever the next years will bring, the gaming industry undoubtedly stands at the threshold to new growth opportunities that have the potential to surpass even the most successful developments of the past.